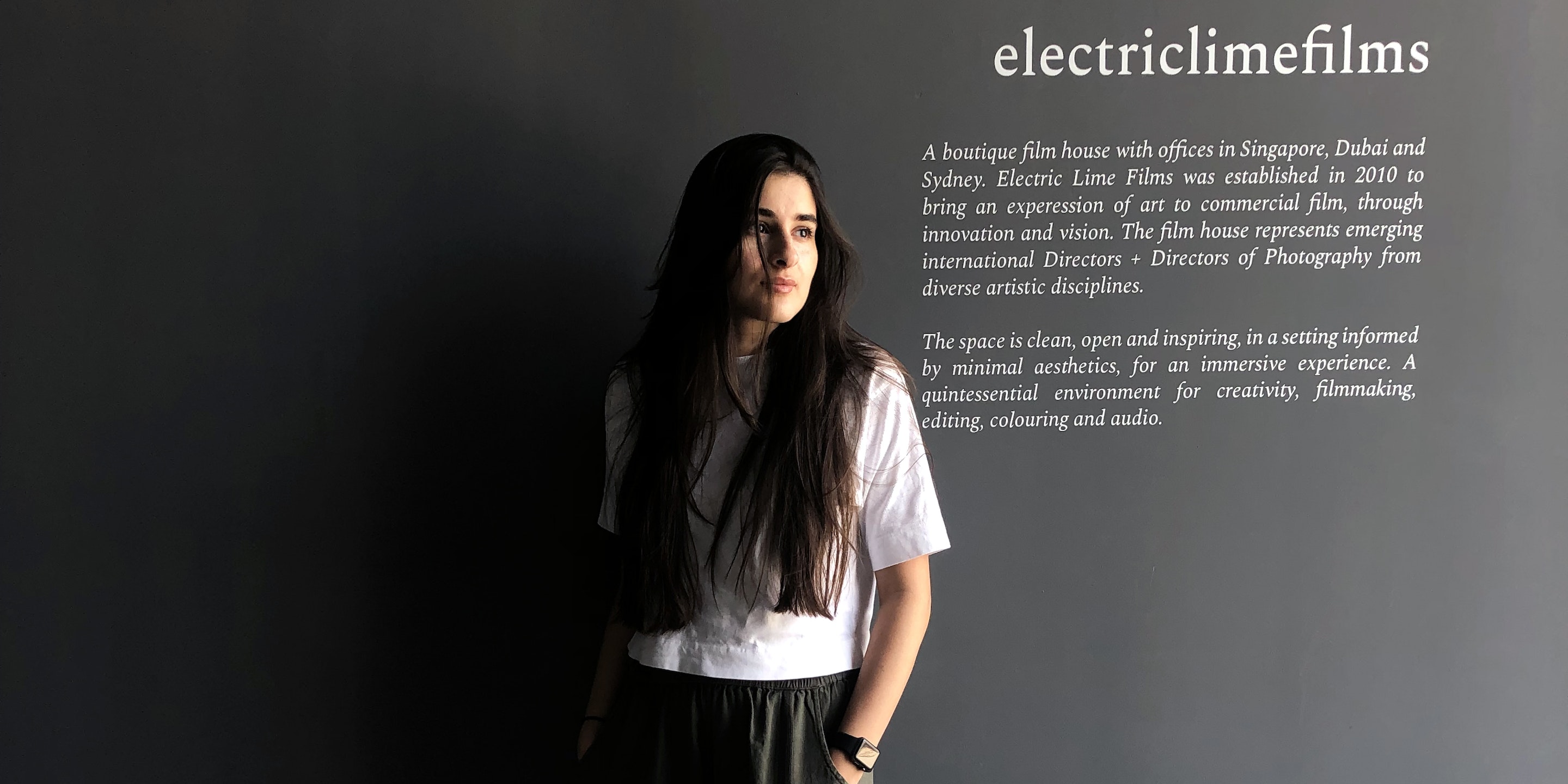 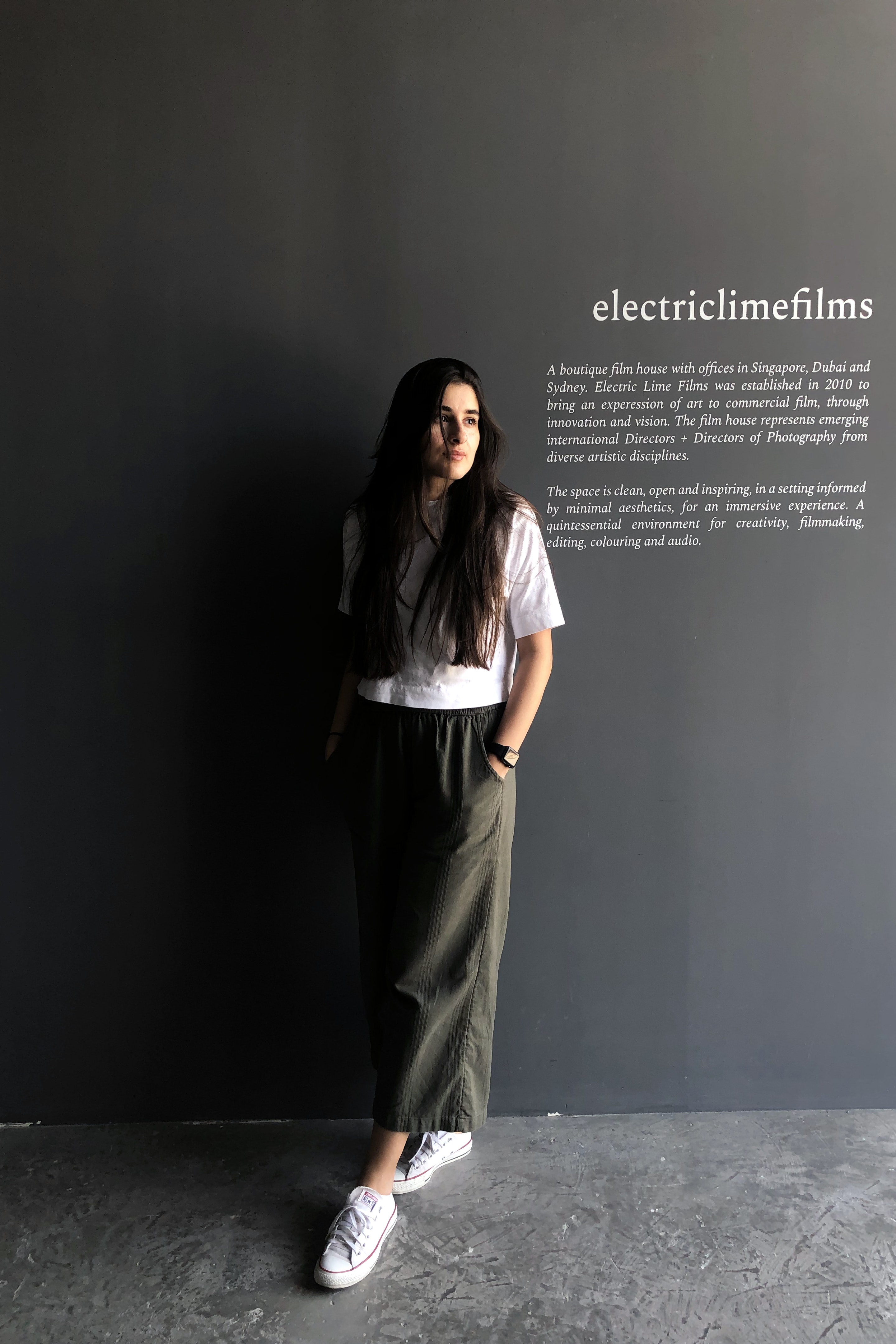 Layal Mooti is an integral and important part of the electriclimefilms team in Dubai.

After graduating from the American University of Sharjah, Layal joined the company in Alserkal Avenue in 2019.

She has risen swiftly through the ranks in just two years, starting as a Production Assistant, moving to Production Coordinator and recently being promoted to Production Manager.

Here she discusses her role within production, her proud moments in the the industry and the future of filmmaking.

Above: Layal Mooti on the set of Valorant

How did you get involved in the industry?

I studied Multimedia Design at the American University of Sharjah, and while one of the aspects the major focused on was film, it was not exactly the main drive. But I loved it since the first course I took.

I was keen to explore more and understand what I loved about it. As the semesters went by, I took all my electives in film and with each one I learned something new about my character.

Film, and I think everyone can relate, is the perfect medium of expression - through visuals, sound and editing.

When I graduated in 2018, I applied only to production houses in Dubai and definitely got lucky with EL!  Although, I have to say I knew nothing about production as it stood. Back in university I knew and understood film as a one/two man job - which of course is not what it is!

I’m super grateful for everything I’ve learned so far and definitely looking forward to what’s to come!

What does your role as Production Manager entail?

The idea is thought to be overseeing the overall production, but I believe it’s a lot more. Being a Production Manager is such a key role on any film set where a lot of responsibility falls on you.

'Eyes and ears everywhere' as my ex-Senior Producer, Chaza Said, would always say.

As a PM I’m very hands on in the production process from start to finish; from managing budgets, crew, permits and schedules, to simply building relationships with people involved in the job.

Working in the film production industry is not made for everyone of course. Choosing the right people to be part of the production team is very crucial, in order to ensure a smooth and professional production, which then makes it easier for me in delegating tasks.

Above: Layal on the set of a shoot for Acuvue

How do you look to approach each project?

Absorbing the brief in the initial stage, of course, which then helps narrow down my options for the production.

One thing that’s crucial to do at the early stages following a job award is to highlight the levels of feasibility the job carries.

Needless to say it’s impossible for everything to go as planned, and of course that’s where the fun lies for a PM - rapid responding, negotiating and shuffling to get back on track!

What do you love about the job?

My career path started with electriclimefilms, and I’m so lucky to have been able to climb up the ladder in a span of two years. I love that every project is different, we work with a variety of brands, agencies, and people for different markets each time, and that just teaches me a lot of new things about the job and the cultures we target.

Being so involved in every aspect and simply connecting with people has been so enjoyable for me. I’m someone who loves to ask as many questions, put myself out there and learn new things every day, and that’s something I’ve been privileged to have the chance to do in the industry and specifically at EL.

I appreciate the team I work with. I really like the collaborative energy we have, the challenges we tackle together and the professional friendship we share. The job and the team constantly help build up my confidence.

Above: Layal on the set of League of Legends: Nexus

What makes the Middle East and the landscape so enjoyable to work in?

There are lots of opportunities to grow here, of course with a fair amount of effort. There’s a good understanding of different cultures around the world due to many multicultural workforces.

Of course, there’s a modest emphasis on the Middle East culture which is something I appreciate, because somehow we’re too influenced by the west - and I personally believe that the Middle East has a lot to offer from culture to diversity.

What is some of the work you’ve done that you’re most proud of?

Absolutely all projects were such useful experiences; but if I wanted to choose one, I’d say the Hilton project was a good learning curve for me. I felt on this project specifically that I was ready to take on a bigger role than I did previously.

Logistics being one of the most crucial departments to handle. Hilton was shot with an international Director and DoP, in Ras Al Khaimah, 1.5 hours away from Dubai and in two different locations with multiple setups. Working very closely with the Producer and the Production Manager at the time enabled me to step forward and develop new skills in myself.

Projects shot during Covid were also projects to be proud of, because restrictions to enter different cities in the UAE and restrictions on set were definitely a challenge that became smoother with practice.

Where do you see the industry going in the future?

We’ve already seen so much progression in the field, new ideas come about every day and our industry is the fastest evolving among others and the most in demand. There are always new methods and techniques evolving in different corporations - which creates competition and growth.